The Belly of the Whale: The First Real Step in Personal Transformation REVEALED: How Much Money You Can Really Earn as a Life Coach

3 Surprising Steps You Can Guide Your Clients Through to Help Them Mine the Gold Nuggets in Any Failure, and Accelerate Toward a Life They Truly Love Living

When I lead seminars to rooms of a thousand people or more, I sometimes ask the audience to raise their hands if they’ve ever experienced a failure at some point in their lives.

And you know what? Every hand in the audience goes up, because the reality is that we ALL make mistakes and we’ve all experienced failure in our lives!

The #1 Most Powerful “Coaching Catapult Secret”

But here’s the thing…

Failure is NOT a problem. It’s what we DO with failure that can become a problem… or not!

Here are three steps you can guide any client who is experiencing a failure through, so that they can have failure without failure having them. 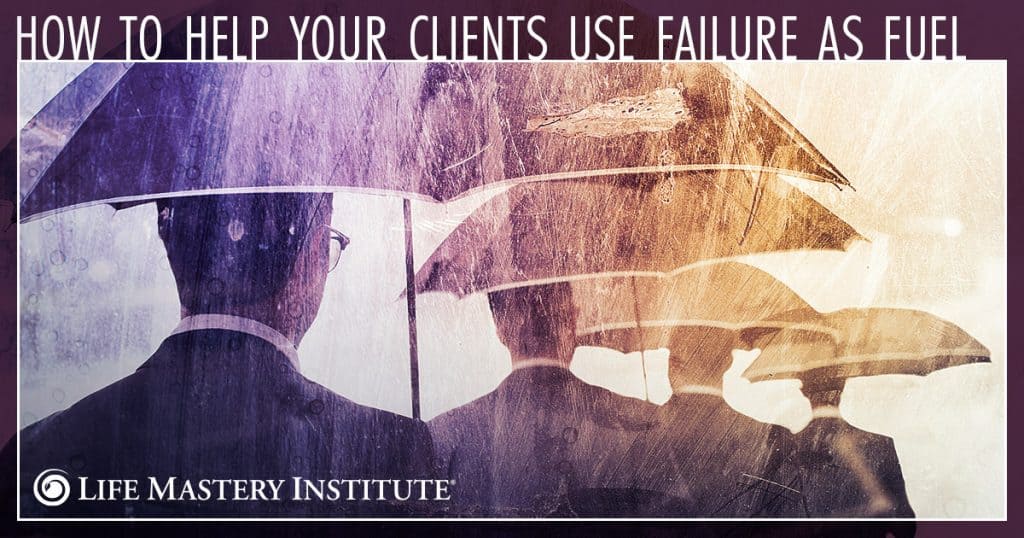 I’ve road-tested all three of these steps in my own life, and with some pretty crummy failure moments, too!

I’ve also tested these three steps in the lives of many, many of my clients.

And what I know is that if you follow these steps, your clients can actually use failure as fuel to help them fail faster, thus allowing them to move toward their goals and dreams with greater speed and ease.

1. Encourage your client to view failure as feedback.

I always tell my clients that they can either consciously or unconsciously choose what failure means to them. 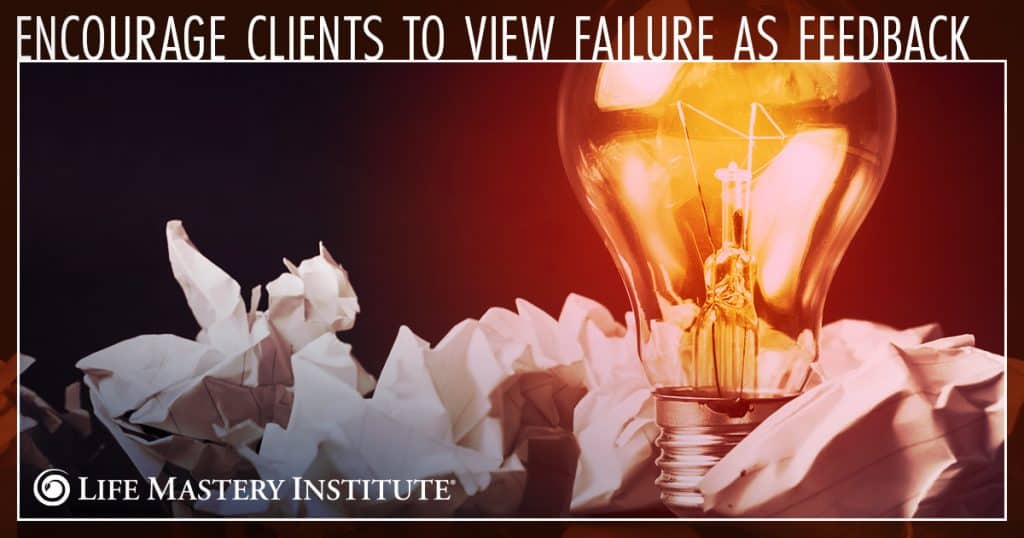 Thomas Edison was once asked how he managed to keep going after he failed so many times trying to create the first commercially practical incandescent light bulb.

He answered by saying,

So instead of making themselves wrong when they stumble, let your client know that the first step to really transforming failure into something useful and valuable is to simply CHOOSE to look at their “failure” as important feedback.

2. Have your client ask themselves, “What can I learn?”

Ask your client if they are able to find the gift in their perceived failure. 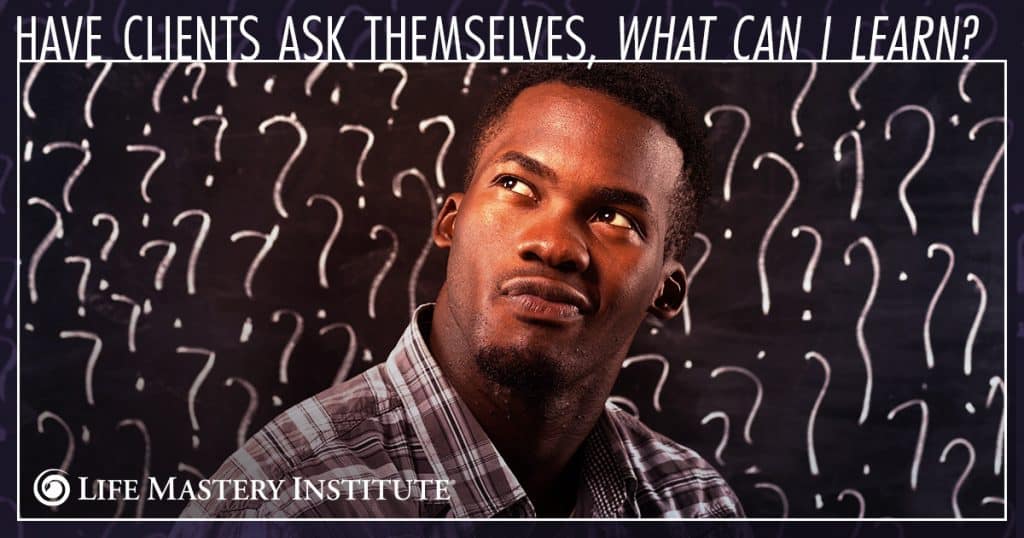 When I present this question to my clients, their first response usually sounds something like,

“Every adversity, every failure, every heartache carries with it the seed of an equal or greater benefit.”

And I say that every seed must be found, planted, nourished and grown so that a healthy crop can be harvested.

A great example of this came from my friend and colleague Bill Harris, who founded Centerpointe Research Institute.

When Bill opened his first company, a competitor sued him for $1 million – simply for opening a company that was similar to his!

Bill’s company was a start-up at the time and he barely had enough money to employ a few people. But he was a student of the steps I’m going through with you now, and so he sat down and asked himself what possible good there could be in being sued for $1 million.

His first thought was,

But he knew there had to be something that was hidden in this experience that he just wasn’t seeing. He knew that he wanted to be highly successful, and so he committed to writing down every single possible good that could come from being sued.

The next thought that came to him was that there was somebody in the world who thought that his business was worth $1 million!

So he wrote that thought down.

Then he wrote: What if I learn how to protect my business from the very beginning of its growth?

After three days of thinking long and hard about what else might be good about getting sued, Bill began to take action.

Since then, Centerpointe has grown to be one of the largest personal growth companies in the world, with program participants in 172 countries!

The lesson here is that it’s important that your client is aware of the fact that all highly successful people know that as long as they keep blaming and accusing others or themselves of their circumstances, they’ll stay stuck in the failure.

However, if they want to transform their failure into something beneficial, they know they must first change their own thoughts about the situation, circumstance or condition by asking themselves what they can learn.

3. Encourage your client to let go and start fresh.

Once your client has looked for what possible good there is in the failure they’re experiencing, the next step is to let go of what happened and make a decision to start fresh. 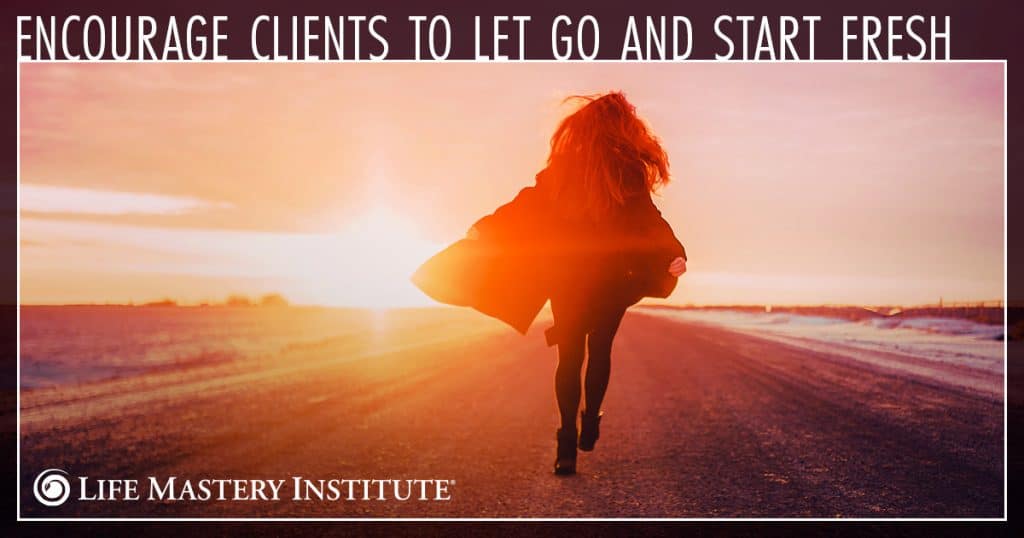 Have them start taking action on the good that they’ve found and remind them that no matter what, they can absolutely start over and create whatever it is that they want to create.

Have them repeat to themselves,

“It’s okay to experience failure, but I am not a failure, and today is my fresh start.”

If you have a client who is used to blaming outside forces for why they don’t have the results they want in life, guide them through these three steps!

You may have to guide them through this three-step process several times, and that’s okay!

Re-patterning and reprogramming your clients’ mindsets is an ongoing process.

But if you stay repetitive with these steps, and compassionately hold your clients responsible for creating lives they truly love living, you’ll help them move toward their goals and dreams with unprecedented ease and speed.

And now here’s a free gift for you!

Are you ready to fast track the growth of your life coaching business – without all of the hard work and struggle?

If so, watch this free video where I reveal my #1 most powerful “coaching catapult secret!”