Do You Know Enough To Be A Life Coach? How Does Life Coaching Compare to Having a Job?

When Things Go Wrong and You Don’t Know Why: How Life Coaches Can Find Blessings Among Problems 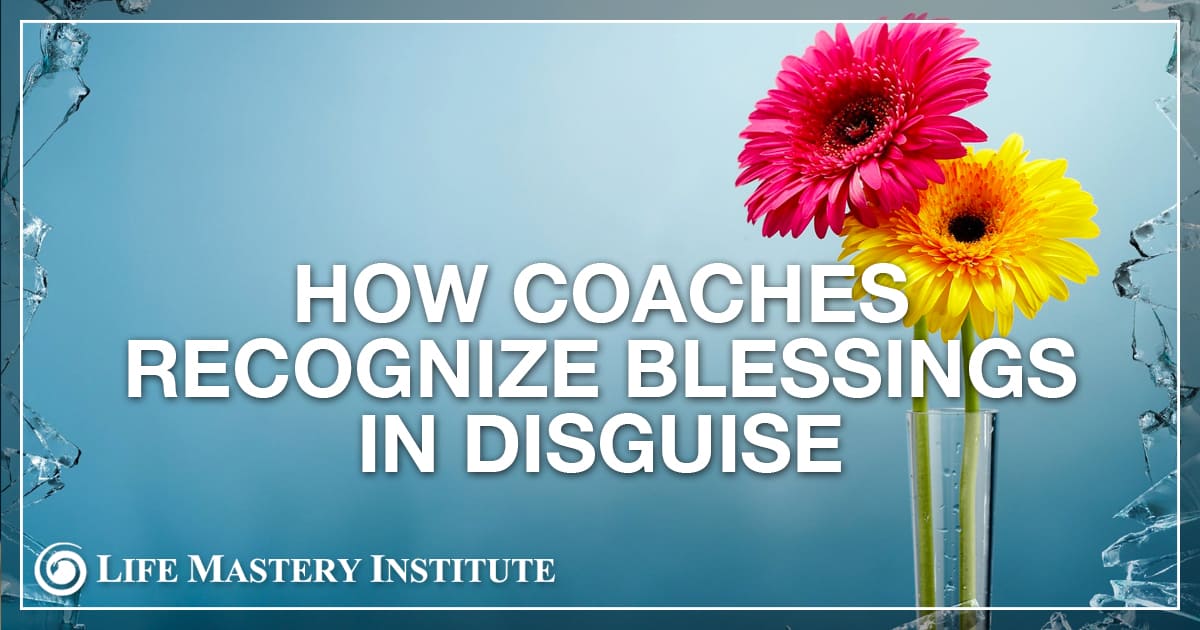 A little while ago, I shared a story about a young author who discovered the reason why ‘bad’ things kept happening in her life.

For those of you who missed it, she was attracting difficulties in her finances, health and love life because she was focusing on, and emotionalizing, scenarios in which those kinds of problems appeared.

So because she was putting so much emotional energy into thinking about problems in those areas, the things she was imagining started to manifest themselves in her physical life.

But that’s not the whole story. Today, I’d like to share the other side of it: the reason why some of those things weren’t as bad as she thought.

How do problems in life turn out to be a blessing in disguise?

When a piece of this woman’s tooth simply broke off in her mouth, it seemed like a bad thing.

For one thing, it meant something was wrong with her tooth, and there might be a problem with her other teeth as well. For another, she would need to see a dentist to get it repaired, which would cost her several hundred dollars, and she didn’t have that much money in the bank.

Not surprisingly, she found it very frustrating. Why had this happened, when she tried so hard to take good care of her teeth?

She knew there had to be SOME good side to the situation – she’d been studying the Laws of the Universe long enough to know that everything happens for a reason, and those reasons are always meant to help us in some way.

But in the midst of the situation and the financial worries it created, it was hard for her not to feel like what had happened was a bad thing.

But when she went to the dentist, she found out that the truth was very different.

As it turned out, what had fallen off her tooth wasn’t a piece of the tooth itself, but a filling that had been incorrectly installed. It had come loose and begun to trap food, which was slowly rotting through her tooth. By the time she got it examined, the decay had nearly reached the nerve… but it wasn’t there yet.

If the filling hadn’t fallen off when it did, the tooth might have rotted right down to the nerve, which would have necessitated an expensive root canal.

As it was, they were able to save the tooth without going that far, and it actually cost less money than she’d feared it would.

What initially seemed like a very bad thing – a piece of her tooth falling out – turned out to be the warning sign she needed in order to protect that tooth and save herself hundreds of dollars.

It was a good reminder to her that every time something ‘bad’ happens, there’s some good to be found in it – whether it’s a lesson we need to learn, an obstacle that can be avoided, a wound that’s being brought to the surface to be healed, a step forward in our personal growth, or a material blessing that is being prepared.

Do you want to turn the problems in your life and others’ lives into blessings?

Sometimes, when people are in the middle of their problems, it’s hard for them to see the blessings, lessons and opportunities that are available to them.

That’s part of the reason why Life Coaches are so urgently needed. Whether it’s something relatively minor like a broken tooth, or something more dire, people often need help to see the good in their situations so they can recover and move forward.

Do you know someone who’s struggling? Are you struggling yourself?

And would you like to learn how to not only find the good in bad situations, but to develop rock-solid confidence and faith, so that the situation doesn’t even feel ‘bad’ to you in the first place?

You CAN create the ability to feel secure and calm no matter what the world around you is doing, and to create plans that turn difficult situations into blessings, even if the people around you don’t think that’s possible. To discover how, scroll up and fill out the form on the right, and my team will get in touch to explain the whole process.